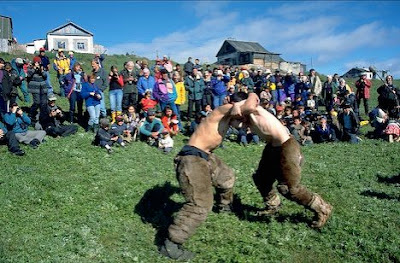 And Jacob was left alone. And a man wrestled with him until the breaking of the day. When the man saw that he did not prevail against Jacob, he touched his hip socket, and Jacob's hip was put out of joint as he wrestled with him. Then he said, “Let me go, for the day has broken.” But Jacob said, “I will not let you go unless you bless me.” (Genesis 32:24-26)

I got into a fistfight last week.

Well, I suppose you could call it a fistfight. I got hit about 10-12 times without landing a single punch myself. It’s been a while since I have been in a fight. As a police officer, I probably get into more fights than the average middle-aged man. But at 46, my reflexes are not what they used to be—so I got a little beat up.

It all started when I attempted to make a man do something I thought he should do. I grabbed his shirtsleeve and directed him in the direction I wanted him to go. I’m usually pretty good at directing people. Apparently he was not having the best day and this was not the direction he wanted to go, so he responded by taking a swing at me.

I managed to duck the first blow and easily redirect his momentum; moving him through the open door of my pickup truck where he landed square on his back in the front seat. With his back to the seat, he reached for anything he could throw in my direction to keep me away from him, which happened to be a set of car keys, a water bottle and an ESV Bible.

The keys missed my head by a couple of inches and I managed to dodge the water bottle, but the bible hit me right in the chest—resulting in an out of context (yet unforgettable) illustration of Hebrews 4:12.

As he searched the cab of my truck for something else to launch at me, I took advantage of the distraction and rushed forward through the doorway. He caught me with an up-kick to my midsection but I managed to grab both his legs and pin them to the dash.

My tunnel-vision-focus on his legs left his hands unsecure and I was met with five or six quick strikes to the back of my head with his fist, followed by several scratches to my scalp and face from his fingernails.

I abandoned his legs and latched on to his wrists, pushing his fists into his chest while simultaneously wrapping my leg around his ankles to control his feet. His explosive strength and speed humbled my aging muscles and slower reflexes, but at least I was now in control of the situation—or so I thought.

About the time I was catching my breath and making a new game plan, I felt a sharp, vice-like lock on my forearm and looked up to see the man clenching his teeth down on my jacket sleeve. My jacket was thick enough to keep the bite from penetrating skin, but the initial shock of the pain made me instinctively react.

Still holding his wrists, I broke away from the bite and lodged my elbow and forearm under his chin forcing his head back, his mouth closed, and averting any possible head butting or biting retaliation. The only offense he had left was to spit in my direction, which he did several times between primal screams of violent anger. I took the spit. It was better than the alternative.

Turning my face to avoid most of the projectile spray, I just happened to glance to the back seat of the truck where I saw my wife, daughter and teenage son.  The look on their faces made me realize how serious this incident had become.  I needed to end this fight.

With one last burst of adrenalin-fueled energy, I lifted the man to his feet and out of the seat. Still holding his wrists I swept his legs with my left foot and took him to the ground in the soft snow beside the door of the truck.  The powder absorbed most of the impact allowing me to move to a superior position.

As I pinned his arms to the ground with my hands, I knew by the look on his face the fight was almost over. He continued to struggle and spit, but he was quickly running out of gas. I held him there in the snow till the ice absorbed his energy and cooled his rage.

“Are you finished?” I muttered, nearly out of breath. “I’m not letting you go.”

He struggled one last time and then nodded his head in surrender. I slowly, but cautiously, helped him to his feet and dusted the snow from his back.  This fight was over. I loaded him into the truck and continued on to our destination.

It all began as we were headed out the door going to a Super Bowl party. He wanted to take his IPad. I said, “No” and he transformed into the Incredible Hulk.

Sitting in the truck with a protective arm around my son, I began to think how the Lord could possibly be in this. I thought of big words like “sanctification” and “sovereignty”, even “Imago Dei” and “Fearfully and wonderfully made”. These are bold and profound words I admittedly preach louder when the times are less painful.

Then, as the adrenaline dump sapped all of my remaining strength, a glaring image flashed through my head of a man struggling to get away. He cursed his family and His Lord. He fought against love and kicked against the goads. He spit in the face of the One who loved him most. But despite the rebellion and violence, even through the worst of sin and insurrection, his Father would not let him go—holding Him tightly till all the defiant energy was spent.

I am that man.

“I will not let you go.” I remember those words of tough love and bloody redemption very well, spoken by the Father of my salvation and echoed by the wife of my youth. I am eternally grateful for their tenacious gospel grip.

Jake finally settled down and apologized with tears, hugs and kisses. I wonder how he can vacillate so quickly between innocent bliss and animalistic violence. I wonder how much longer my strength will hold out. But no matter how he acts, he will always be my son. I will fight his rebellion with all my strength and all my love, and I will never let go—because I was never let go.

“Child bitter with rage, blind and broken under this weight.
Seek Me first and you will find,
righteousness for your heart and peace for your mind.
I came to find you; in Me you will be found.