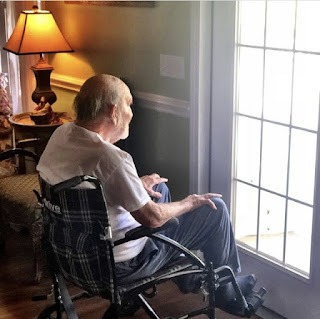 I was sitting with my dad by his hospital bed watching him sleep, or at least he was trying to sleep. The Parkinson’s disease caused him to shake uncontrollably. Even after two implants in his brain to calm the tremors, he still had little use of his fine motor skills. It was difficult for me to look at him in this state, but still I watched, thinking about his life. Thinking about my life.

His wife called me the day before crying and said she could no longer care for him. She is 86 and has health issues of her own. I arrived at their house and found him in his bed covered in his own urine and feces. I cleaned him up the best I could and called an ambulance.

“Where are we going?” He struggled to protest in his weak, raspy voice. “Don’t take me to the hospital.”

This battle has been ongoing for the past several years. His wife calls and I come. I clean him, feed him, dress him, transport him to his doctor visits, and I do my best to take care of him. I try to talk him into getting more help and he always refuses. “I don’t need anyone to help me!” He says frustratingly through gritted teeth. This has been the mantra of his life.

“Ok dad.” I reply as I guide another spoon full of food to his mouth, trying to feed him breakfast before the ambulance arrives. My father has always been the most prideful, stubborn, headstrong man I have ever known.

But now he is rapidly declining. He has lost all ability to walk, feed himself, and clean himself. Even the part-time care workers we have hired cannot keep up with his physical and medical needs. His wife of 48 years sobbed in the background as the EMS workers put him on the gurney and pushed him out of the bedroom. She knows this is the beginning of the end.

As I followed the gurney down the narrow hallway of their home, I was stopped by one of the  photographs on the wall. It’s a picture of my dad and his wife. He is smiling, handsome, healthy, strong and robust. She is strikingly beautiful. He looks to be in his mid to late 40’s. Younger than I am now.

I wonder when it will be my turn.

My relationship with my dad has always been problematic at best; toxic and traumatic at its worst. My dad left my mom before I was born. I was two-years-old when my mother called my grandparents from St Louis, Missouri and said she could no longer care for my two sisters and me. We went to live with my paternal grandparents in West Virginia. I didn’t see my biological mother again for the next eight years.

My dad remarried and moved into a house just half a block away from my grandparents. The sad irony of our relationship was that I could literally see him sitting on his front porch from my grandparent’s back porch, but he always seemed to be two hundred miles away. I would see him in passing nearly every day. And every day I would wonder why I called a man “Dad” who was never a father to me.

He was a hard-working man, that’s all I really knew. He worked 12 to 16 hour days, often 6 days a week as an electrician at a large oil and gas refinery. He went to bed early and got up early. His job was his life.

But every day on his way home from work he would stop by for a brief moment and check on my grandparents. Most times he would never even sit down. He didn’t spend any time at all with his children. He didn’t go on vacations with us. He didn’t come to sporting events. He didn't attend school functions or graduations. He didn't support us financially. He didn’t express any love for us at all, like a father should. My dad was never intentionally mean, unkind, or cruel. He was just absent, distant, and apathetic.

He never had much to say to me especially, except for his life-long jest in passing when he would look me in the eye, shake his head, and say with a half-smile, “Son, you’ll never make it.” He didn't said it in a malicious way—it was a joke to him. I knew deep down that he didn’t mean it. At least I thought I knew.

That’s the problem with a father’s words. They sink so deep into your soul that they often get lost in translation. Sometimes they dig like a shovel in the dirt. Other times they cut like a knife into the flesh. But they always go into the heart like a mysterious seed, deeply planted. And you never know what will grow there until years later.

It was a joke to him, but it was life-altering to me. I spent my childhood and most of my adult life trying to outrun those words and prove him wrong. I also spent a good portion of my life not knowing or understanding how to love or be loved.

After high school I would marry a wonderful wife who loved me more than I had ever been loved. We would adopt three sons and a daughter who would shower me with love, respect, and affirmation. I vowed to be the husband and father my dad failed to be.

Still, love—unconditional, sacrificial, trustworthy love—remained a foreign concept to me. I didn’t know how to give it or receive it. I was always ready for abandonment. I expected it. That was my default setting. I kept everyone at a safe distance.

After all, I thought, I am my father’s son.

He was to be moved from the hospital to an extended care facility in a couple of days. As I sat by his bed I saw in his eyes a deep sense of regret for the past and a deep fear of the future. I do not want to have that look in my eyes when it is my turn to lay where he lays.

So I gathered up my courage and spoke the words to him that should have been spoken from the beginning. Words of closure for me, and for him.

“Time for what?” He whispered with his frail, fading voice.

“OK. I'm not going anywhere.” He responded with a nervous half-smile.

But all the “should haves” and “could haves” mean nothing now. And he knows that he has wasted most, if not all of his life. I took a deep breath and prepared to speak. I was rather surprised at my nervousness.

“Are you ready to meet the Lord?” I ask him.

He looked at me rather surprised with a certain fear in his eyes, as if I had just pushed him towards the judgment he expected to come. I had talked to my dad many times through the years about redemption, salvation, and the gospel of Jesus. He would always shut down and change the subject, or make some kind of excuse to leave the room. But now all his excuses were gone. He had nowhere else to go.

“I don’t know.” He whispered as he looked away.

And then something rather miraculous happened. My dad began to weep, softly at first, then uncontrollably. Like a switch had been flipped. He wept openly for what seemed like a very long time. And for a long time I just sat there and watched him cry. Partially because I didn't know what to say next, but mostly because it was something I had never seen before.

After a while, I continue to speak the only words between my dad and me that really seemed to matter.

“Dad, Jesus lived a perfect life—a life you could never live if you had a thousand lifetimes to live. And the bible says he will give that life to you, place it on your account, so that when you stand before God, he will see Jesus’ perfect life instead of your sinful life. Do you...want that?” I paused, hoping I got it simple enough for him to understand.

“Yes, I want that..I want to believe that.” He replied through tears.

“Do you know that Jesus died for your sins? He paid for them all, past, present and future, with his sacrificial death. All the punishment meant for you for all the sins you have ever committed or will ever commit, Jesus took on himself, on your behalf.

“Do you believe Jesus died and rose again?”

“Dad, the bible says Jesus ascended into heaven and sits at the right hand of the Father to forever make intercession for us...for you. He’s praying for you right now. Bank all your hope on him!”

I leaned in close and took his hand. “Dad, Jesus says he will never leave you, he will never forsake you. He will be with you as you walk through the darkest valley. He will carry you across the finish line. And when you close your eyes in death, you will open them to life, to see his face. That is something to look forward to, even in the most difficult days to come.”

We talked for a long time about repentance and faith. About forgiveness and grace. We wept together. We prayed. It was the deepest conversation I ever had with my father.

Exactly one month after his 81st birthday, my dad was born again. He passed from death to life. He was adopted as a son. No more regrets, no more disappointment, no guilt in judgment, no fear in death. Just peace, acceptance, confidence and love. A wasted, ruined life—instantly transformed into a life well lived. That is the power of the gospel for failing fathers everywhere.

My dad spent the next 13 months in a nursing home. He suffered greatly, but touched lives immensely. The nurses and caretakers doted over him. “Your dad is so kind, and funny, he always has something sweet to say. He is one of our favorite patients to care for!” They would often tell me. “My dad? Are you sure you have the right man?” I would think to myself and smile.

The Parkinson’s eventually ravaged his body even though his mind stayed sharp to the very end. I was by his bedside the day he took his last breath. It was peaceful and gentle and without struggle—like a long sigh of relief at the end of a very difficult battle. I sat with him for a long while, looking at the weak and withered vessel he had left behind.

And I could say it sincerely, because everything that was deficient in my dad’s love, affection, and affirmation was made whole in Jesus' life, death and resurrection. All of his insufficiency to be a good father to his son was made infinitely sufficient in my heavenly Father’s love for me.

Like my dad, and failing fathers everywhere, I rest in the promises of the gospel. The promise of redemption, forgiveness, and grace. And through these promises I can proclaim with confidence and joy,

I am my Father’s son.