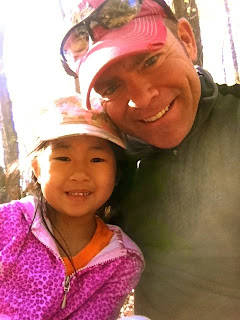 “That’s a big rock”, she said looking skyward—in the best way a five year old could reflect on bigness.

It was indeed a big rock, even to the eyes of a middle-aged man, who had observed and scaled his share of geological structures over a rather adventurous half-life. It appeared as if it had fallen out of the sky, rather than simply jutting out of the ground. It stuck in the side of the hill tapered downward like an upside-down pyramid

I could best describe this place as a craggy island in the plush forest, but the enormity of this stone was not as much in its size as it was in its symbolism.

“I don’t think…I can climb up there”, she said as she stooped to pick up a small twig, using it as a pointer to extend her expression towards the rock face. “I will carry you.” I replied. She looked at me with rather cautious eyes countering my offer with, “I don’t think that is a good idea”.

I smiled at her cynical logic. My young daughter has an old soul locked away inside of her tiny body--a prophetic sort of wisdom that is beyond her few short years and small stature.

“But I have something I want to show you. It will be worth the risk.” I negotiated, as I scooped her off the ground and swung her onto my back in one swift, playful motion. She squealed and laughed and then clamped her arms tightly around my neck.

We started up the small goat-path through the crevice in the rock. It was only about 30 feet high, but it might as well have been Mount Everest to my tiny passenger. The vertical face of the obstacle before us was cliff-like in structure and the top was flat like a tabletop. The pathway zigzagged to the side of the stone through a few smaller structures and then turned completely to the rock. It was quite a challenge just to climb the path, and then just before reaching the top, some amateur rock face climbing skill was needed.

“Are…you…sure…this is safe?” she asked as I clung to a sapling with one hand and the side of the rock with the other. “Who said anything about being safe?” I joked as my voice strained under the exertion. “We are almost there.”

As I crested the top of the rock, I crawled to the center of the tabletop and sat down on my backside. She loosened her grip from my neck and slid off my back sitting on the rock beside me. “Wow!” she said in an excited whisper as she looked out from her new vantage point. “You can see forever from here!”

“And why did you bring me up here?” she asked, sounding more like a skeptical teenager than an adventurous five-year-old.

“I brought you up here to teach you something about God.” I began.

“God made this rock, right?” she interjected.

“Yes, He did. He made this rock a long time ago, before He made you or me. This rock was probably here before Jesus died on the cross.”

“Probably before David fought Goliath too.” She added.

For some reason, most of our theological discussions always include at least one scene from the story of David and Goliath. Such as the day I was talking to her about the resurrection of Jesus and after much silent contemplation she added, “It’s a good thing Goliath wasn’t resurrected, we’d all be in trouble.”

“I brought you up here to tell you that God answers our prayers.”

“I already know that.” She retorted.

“But I want you to know it more than you already do.” I gently persuaded. “I used to climb this rock every week with a good friend of mine and we would sit here and pray. Sometimes, when I hunted in these woods, I would come to this rock and just sit and pray.”

“What did you pray about?” She asked sincerely.

“I prayed that God would send me a daughter. I prayed this before you were born, before I ever knew that you existed. I prayed every week, sometimes every day. When I think about this rock, I think about coming to God and asking Him for something very precious.”

“And God answered your prayer!” she interjected.

“And God answered my prayer, beyond what I could have ever imagined.” I added with a smile.

We sat there on the giant cliff looking out over the farm for several minutes. It was all that I could do to keep from shouting praises out loud as I watched her and thought of those great times on this rock with my Father in prayer.

Sometimes my faith wavered and solid promises were overpowered by the human nature of doubt and cynicism, as the weeks turned into months and the months turned into years. But our God is a timeless God and His delays are always made in wisdom and love. And today, sitting beside me smelling the spring flowers she has pulled from a crevice in the the stone table top of this sacred place, is the living, breathing, rock-solid proof, that God indeed answers prayer.