The Man Who Was My Father 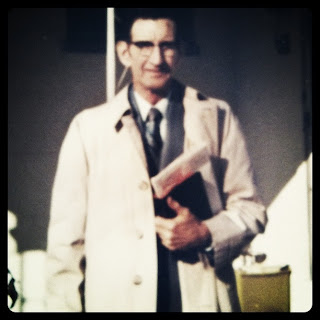 He has told you, O man, what is good; and what does the Lord require of you but to do justice, and to love kindness, and to walk humbly with your God?” Micah 6:8

My grandfather drove a semi truck for nearly 30 years. When he retired they gave him a cheap wristwatch with a picture of an 18 wheeler on it, and a safety certificate for never having an accident on the road. He cherished them both.

Then, when he reached the age when most men are counting their 401k’s and planning paradise retreats to Disney Land lifestyles, he made the decision to bring three more children into his house and raise them as his own. Instead of retiring, he started all over again.

I was two years old when I came to live with my grandparents. They always seemed old to me. The generation gap was very difficult at times, especially when I reached the rebellious teenage years. But my grandfather was a rock of steadfast faithfulness and every decision he made fell from the standard of God’s word.

He kept his entire theological library by his living room chair--a KJV bible and a Strong's Concordance--but he never used God’s word to beat or berate, only to comfort, warn and encourage.

I remember one day (in my wise teenage years) arguing from scripture that long hair was both Christ-like and biblical. I justified that Samson had long hair and it made him strong. My grandfather gently picked up his bible, opened it to 1 Corinthians 11:14 and read, “Doth not even nature itself teach you, that, if a man have long hair, it is a shame unto him?” He then read me the end of the story of Samson and closed his bible without saying another word. I quietly walked away from our “conversation” with a deep respect for the sufficiency of scripture for all things.

My grandfather looked like Abraham Lincoln without a beard. He was the most masculinely tender man I have ever known and the closest to Christ-likeness of any man I have ever watched. And I watched him all the time.

I watched him every Sunday morning from the back seat of his old Chevrolet Impala as he drove us to church. He always sang along with the gospel quartets on the radio as he drove across town. And he always cried as he sang. Every Sunday morning that I can remember, he cried on the way to church. I cried on the way to church because I would have rather been going someplace else. He cried with a longing to be someplace else too, someplace heavenly with his Savior. He lived his life in eager expectation of heaven and made very few investments on this earth that did not have eternity as a dividend.

I watched him stop on the way to church every Sunday to pick up an older lady and sometimes her disabled adult son. She rode to church with us for years. Sometimes the car was uncomfortably packed with passengers. I have no doubt that if my grandfather would have owned a bus it would have been full every Sunday morning.

I watched him pastor and preach at an old time fundamental United Baptist Church where the preachers were known for shouting, screaming, foaming and fuming with a hiccup-like cadence that I could never understand. My grandfather opened his bible and spoke gently, plainly, clearly, humbly and profoundly. Some of the first words from the gospel that sank deep into my heart came from his preaching.

He loved telling the stories of Lazarus being raised from the dead and Paul's Damascus Road conversion. I think these biblical accounts were most like his own resurrection story. He also told me about his life before Christ, about nearly dying from drinking tainted pure grain alcohol, rolling his car over a hill and coming home on more than one occasion bloody, beaten and drunk. He said he was “mean as a snake” before the Lord got hold of him. He was profoundly changed by the gospel.

I watched him as he visited the sick, the dying and the destitute--not just as a pastor, but as a person. I remember one day watching him open the front door of our house to greet the mail lady as she dropped off the morning mail. He asked her how she was doing and she replied, “I’m ok.” He pressed a little deeper, “How are you really doing?” She then paused and began to cry. I watched from our living room as he brought her into the house, sat her in his chair and listened to the difficulty of her life, consoling her with bible passages and hope. He listened so intently and cared so deeply.

He met the garbage men every week with a cold drink and a sincere short discussion about their day. It was difficult to go anywhere with my grandfather because he carried on deep conversations with everyone, from the pharmacist to the clerk at the grocery store to the janitor in the shopping center. But he didn’t just talk, he listened intently to everyone. He always had a cool glass of water for thirsty souls.

My grandfather was kind and humble, but he was also a sheepdog when it came to his family. I remember one night a drunk man came to our back door and tried to get into our house. The man was not trying to break in, he was only confused as to which house he was going to. My grandfather met him in the doorway with a pistol, grabbed him by the scruff of the neck and ushered him to the street. He never said a vile word to the man, but he let him know that this was not the house he was looking for.

I watched him struggle with prostate and bladder cancer for nearly 20 years, enduring radiation treatments several times a year. The doctors visits were a steady part of his routine schedule for as long as I knew him. But the cancer never daunted his joy and I never once heard him complain. Going to the doctor meant he got the opportunity to talk to people. Every six months he was hospitalized to scrape tumors off the inside wall of his bladder. The nurses knew him by name and looked forward to taking care of him. He, in turn, considered his hospital visits as an opportunity to care for their souls.

I also watched him faithfully and dearly love my grandmother till the day she died. They were married for 56 years and he loved her passionately to the end. Then, six months almost to the day that she died, he went to be with her and Jesus. And I watched him die well. Even in the hospital during his last days, he was encouraging the doctors and nurses with hope from his bible.

His death impacted me as much as his life. I remember the night before he died kneeling at his bedside and asking God to give me a double portion of my grandfather’s spirit. I think that is a biblical request and the most honoring thing a son could ever ask to share with his father.

It has been nearly 17 years since my grandfather died and still no man has influenced my life like this humble, gentle, Christ-like father. He taught me how to be a man, to love my wife and raise my children. He instilled in me a deep love and respect for the bible as I watched him impact his entire world with a "hands on" gospel, one investment--one person at a time. He taught me that there are no insignificant people on this earth. “Everyone matters to God, so everyone matters.”

I often find myself thinking about what a truly exceptional Christian life looks like and then trying my futile best to match up to it. Is it reaching hundreds or thousands with the gospel? Is it pastoring a mega church? Is it compiling a library of solid theology or writing volumes of books? Perhaps it has something to do with how many followers you have on your blog or Twitter account?

Then I look at the life of my grandfather. He had an 8th grade education, owned two books, drove a truck for 30 years, was married to the same woman for 56 years, raised three children and then three grandchildren, and pastored a church of less than 70 people. He lived humbly, loved hard, laughed often, cared deeply and died well.

He also owned a watch with an 18 wheeler on it and a safety certificate for never having an accident on the road. Pretty good accomplishments for an exceptional life if you ask me.

“He has told you, O man, what is good; and what does the Lord require of you but to do justice, and to love kindness, and to walk humbly with your God?” Micah 6:8