Great Grace In The Small Things of Life 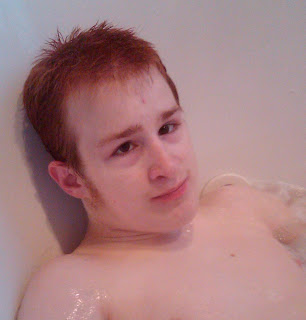 I joke with my wife in a humorous attempt to decide whose turn it is to handle bath time for Jake.

“I’ll do it.” She replies, with slight resignation in her voice.

“No, I’ll do it.” I respond accordingly to her weary tone. Such a mundane decision for most parents is actually an act of chivalry in our house. One of the most powerful phrases in our love language to each other is often, “I’ll give him his bath tonight.”

Admittedly, she has told me, “I love you” many more times than I have told her.

As I walk up the stairs to Jake’s bedroom I roll up my sleeves and literally stretch my shoulders, back and neck to prepare for the match.

He’s watching TV—flipping through the channels in a rhythmic pattern. The calming effect that the television has on Jake is amazing. Even more amazing is the complete and instantaneous evaporation of composure that occurs when I turn the TV off and begin running the bath water.

I have never bathed a cat, but I know what it’s like to bath a cat—even a family of cats, because I have bathed my son for 17 years. Jake does not like to get naked, he despises getting clean and he fears water. Combine the three and the unholy trinity surfaces for an epic battle, scheduled nightly, usually around 7:30PM.

I approach his bedroom like a UFC fighter entering the ring. My mental focus intensifies as the physical strategies begin sorting themselves out in my mind:

“Gloves on, water drawn, towel down, clothes off…butt cleaned, fight on, in the water, scrub down…wash hair, rinse hair, out of water, towel dry…lotion, commotion, tears like the ocean…dressed again.” It sounds like a strange rap song inside my head. Actually rap music would be more inviting than the noises I am about to hear.

Maybe I’ll wear the iPod tonight…put on the noise cancellation headphones and turn up the music to drown out the wailing and gnashing of teeth. There is something inspiring about putting human drama to a soundtrack. I imagine my life played to a Derek Webb song…or perhaps a Bob Kauflin hymn.

But much to my surprise tonight will be different; gloriously different.

Truth is you never know when or where the wind of God’s grace is going to blow. Grace is like that—unexpected, undeserved and unpredictable. Tonight God would reveal some of that mysterious grace in the peaceful blessing of His presence…at bath time.

As I reach the top of the stairs the wind of God’s grace blows through our house. No less for me than it did for Moses as he stood before the Red Sea, Joshua at Jericho, or Gideon at Jezreel.

To my utter amazement, Jake voluntarily, with a smile, walks into the bathroom and begins to get undressed…on his own.

Miraculously, his pants are not soiled. There is no wiping or fighting. I run the bathwater and he steps in without being coaxed. He motions for me to put some bubble bath into the water and the tub quickly fills up with suds. He’s happy tonight.

Then Jake does something that I have never seen him do; he lies back in the water and relaxes. I mean really relaxes. The ticks and twitches all but stop as he lies motionless in the warm bath. He does not whine. The room is perfectly quiet.

Taking advantage of the rare moment, I get the opportunity to just sit there and look at my son. He looks different tonight, almost like he has no disabilities at all. His glasses are off, his eyes are clear and the continual torment of anxiety has left his face for the moment.

The refraction of the light on the water makes his legs look straight and strong. His complexion is perfect in the soft glow of the bathroom lamp and for the first time in a long time at bath time—his demons are cast out and replaced with a tranquil peace.

I stared at Jake for a long time imagining what he would look like or be like without his afflictions and handicaps. For a brief moment I was given a picture of my son without his disability. It was a wonderful gift from a gracious God.

He stayed in the bathtub till the water got cold and then he stood up on his own to be dried off. As I wrapped the towel around him and lifted his 130 pound body from the water, I embraced him tightly.

He shivered slightly from the cold transition of the water to the warmth of the towel as he allowed me to hold him longer than he usually does. I smelled the strawberry shampoo in his hair and the clean scent of Dove soap on his cheek.

Grace in the small things of life, is never small grace.
Posted by Greg Lucas at 11:36 AM