It was Christmas—and there I was on my hands and knees in the bathroom, cleaning up urine…again.

“I’m getting too old for this.”

The scrubbing becomes more fervent as a wallowing sigh of “Why me?” escapes from my heart and a few self-pitying tears fall to the floor mixing with the mess from my teenage son’s latest “accomplishment.”

Suddenly, I’m caught off guard by the unexpected, comforting presence of the Almighty. My mood changes, my heart warms, and the hard tile floor become soft under my knees. I close my eyes, smile and whisper a verbal surrender, “Thank You.”

The smell of urine is miraculously transformed into the sweet aroma of God’s mercy and grace.

Weeping and talking to God while soaking up a urine-puddled floor with fragments of disintegrating toilet paper could be mistaken for mild hysteria, unless I took you back about nineteen years into the life of my disabled son.

That’s when I changed my first diaper as a new dad. I can still remember the smell of baby powder and Desitin as I gingerly picked Jake’s two little feet off the changing table with one hand, nervously lifting them into the air and wiping while my wife coached me through the entire event, “Your doing fine.” She encouraged. “You’re not going to break him. Get every crease and crevice, you don’t want him to get a rash.”

I was like a medical intern nervously fidgeting over my first patient as the doctor observed and instructed.

After a while I got used to it. I even became good at it.

Sometimes I would play a game with Jake where I set a timer and acted like a calf-roper at a rodeo, “GO! And the diaper is OFF! And the butt is CLEANED! And the new diaper is ON!” I would throw my hands into the air when I completed the cinch and yell, “TIME!” Jake would always grin at my diaper wrangling antics.

As the months went by I considered myself a professional diaper changer—if there were such a thing. I could literally change my son’s diaper with one hand while talking on the phone and flipping through the channels with the remote between cartoons and kid’s shows.

Then the months turned into years and we eventually began the tedious process of toilet training. But Jake didn’t get it. His cerebral palsy left him with little control and autism stole away any personal concern for soiling his pants. To make matters worse Jake suffered from a terrible sensory integration issue that made him fearful of bathrooms, running water or being naked.

As the years passed, Jake’s disabilities became more and more profound and the daily, hourly fight to toilet train was eventually abandoned for bigger diapers and boxes upon boxes of baby wipes. The house took on the smell of an unkempt care facility and accidents became more and more graphic from urine stained pants, socks and shoes to fecal matter smeared on walls and in hair.

Jake became less cooperative and more violent with every birthday—he hated being cleaned.

Diaper changing became a time of prayer and pleading with God, “You don’t have to heal every disability of my son, but could you just let him be able to use the bathroom in the toilet? I can take the non-verbal autism, PDD, OCD and cerebral palsy, but I don’t think I can change another diaper!”

But I was wrong. I could change many more—thousands more.

And then, through a rather miraculous turn of events, after years and years of changing thousands and thousands of diapers, God answered our prayers. Jake was seventeen years old when he first used the toilet, and by the time he turned 18 he could go on his own. Accidents were still common, but he got it. He finally got it!

I remember well the first time he signed “potty” in public. We were in a Wal-Mart Superstore. I rushed him to the men’s room and he pulled down his pants on his own and began peeing. He peed all over the seat, the wall and the stall. He was laughing and jumping up and down while urine streamed like water from a lawn sprinkler. I was laughing and crying and praising God. Not one drop went into the toilet, but Jake wore underwear that day and his pants stayed dry.

So here I am. It’s Christmas. Jake is Nineteen years old. The entire extended family is gathered around the table eating a Christmas feast and talking about their kid’s amazing accomplishments and events, from scholarships to dean’s lists to upcoming weddings.

And I’m on my hands and knees on the bathroom floor—cleaning up urine again…and praising God. 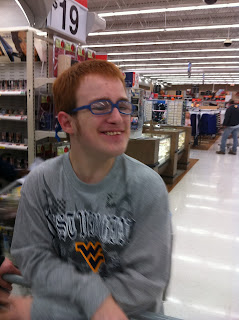